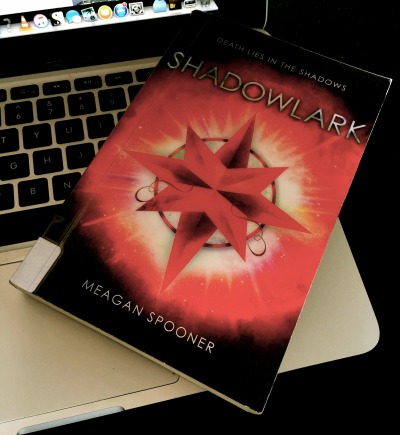 Ever since she escaped the city within the Wall, Lark Ainsley’s wanted one thing: to find her brother Basil. She’s always believed he would be the one to put an end to the constant fear and flight. And now, hidden underground in the chaotically magical city of Lethe, Lark feels closer to him than ever.

But Lethe is a city cowering in fear of its founder, the mysterious Prometheus, and of his private police force. To get the truth about what happened to Basil, Lark has no choice but to face Prometheus.

Facing her fears has become second nature to Lark. Facing the truth is another matter.

It took me longer than expected to read this, not because I was not interested in the story, but because I had no motivation to actually pick up any book for a few days. When I did pick up the book, however, I had a very hard time putting it down. I read the first 80 pages one day, didn’t touch the book for a few days, then devoured the rest the next time I picked the book up.

I was so happy when I went to return it to the library and saw that the third book was available.

Lark’s been used and manipulated by people she thought she could trust in the first book, and by the time we’re less than halfway through this one, she’s tired, and it comes across. She’s guarded and wary, and hurting, but she wants, more than anything, to trust the people around her. But she barely even trusts herself. Her emotions are so real and visceral – I could feel her exhaustion, her fear, her worry. I could feel how much she wanted to reach out to Oren, but her doubts holding her back.

This arc of the story was quite a bit darker than the first. And considering the first was pretty dark, that’s saying something. Characters are hurt, characters turn on one another, characters die – and through it all, I could feel Lark’s uncertainty, her loss, as if it were my own. Meagan Spooner’s writing, as always, left me in awe at the emotions it evoked in me, at the imagery it painted. She truly has a way with words.

I don’t want to spoil the book, but there is one – twist, I suppose you could say. When I reached that point of the book, I felt shocked, and also at the same time, it made so much sense. Leading up to it, I had my suspicions, but then something would happen in the story that had me doubting my theories – the pieces were there, but in such a way that even if you put them together, you’d still be left breathless when the revelation occurred on the pages.

All in all, it was a great read, and I really hope book three lives up to the story, and wraps it up well.